Torquay, a traditional yet thriving seaside town set on Devon’s English Riviera coast.  If you haven’t visited for a while, then banish those thoughts of a resort that has seen its hey day…. the best is yet to come. With its iconic palm trees, busy harbour, international marina, sandy beach and wonderful array of continental style cafes, restaurants and cocktail bars, the scene is set for the perfect Devon seaside holiday or short break. This quintessential bucket and spade resort appeared in The Guardian in late 2016, being described as one of “Britain’s most booming seaside towns, undergoing a style revival with Michelin starred restaurants and swanky yachts”!  You only have to drive along the seafront or take a stroll along the promenade to know that this is true.

Belgrave Sands Hotel – Across the road from the bowling green, tennis and golf at Abbey Park, this casual seaside hotel is a 2-minute walk from the beach, and an 8-minute walk from Torre Abbey, a 12th-century former monastery and art gallery. The streamlined rooms feature en suite bathrooms, free WiFi and tea and coffeemaking facilities; some have sea views. Suites add separate living areas with sea or park views. Breakfast is complimentary. There’s a fine-dining restaurant and a lounge offering casual fare. Other amenities include an indoor pool, a gym and regular live entertainment and dancing.

With entertainment most evenings the price also includes an excursion. 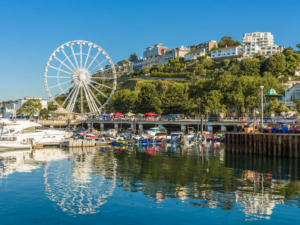